The Meaning of Easter

The Meaning of Easter

At Easter the truth of our human condition is laid bare, as the forces of status quo line up against Jesus. The mob, the Romans and the Jerusalem authorities are united because they have found a sacrificial victim. Even Pilate makes friends with Herod, where enmity had previously divided them. The graves of earlier slain victims are opened on Good Friday as Jesus dies on the cross—the dark underbelly of every stable human religious and cultural order is there for all to see.

Even Peter goes along with the crowd in denying Jesus, and he is only rehabilitated after the resurrection. Thereafter he joins Paul, another former persecutor and denier of Jesus, at the head of institutional Christianity and its mission. Only such often painful healing of immature desire qualifies us for leadership in the Church.

Jesus’ resurrection is an unexpected shock rather than a conventional mythological outcome. The crucified victim does not return as an angry ghost preparing to unleash vengeance. Instead, the first words out of the risen Jesus’ mouth, ‘Peace be with you,’ begin our induction into a new creation with new rules. This is not the Pax Romana, the Pax Britannia, or the Pax Americana but a new peace beyond the settling of scores and the balance of terror: a ‘peace of God which passes all understanding’.

Jesus’ resurrection has been understood by some liberal Christians as just one more piece of mythology, like the dying and rising deities of nature religion. But the resurrection is different from myth. Jesus is not universally welcomed by the crowd as their former victim now divinised. Instead, only a few begin to catch on to what is happening. Whether at Emmaus or in the upper room, it is only a remnant that is persuaded. This resurrection is no typical mythological confection.

As a result of the resurrection, the Spirit of this new creation is released by God to shake our human condition to its foundations. In a world that secures its stable order by the regular manufacture of victims, there is now an ‘advocate for the defence’ who takes the victims’ side. The wisdom of the psalms and Job has gone viral.

Yes, God sends Jesus to the cross. But at a deeper level this is God’s own self, more particularly the second person of the Trinity, freely undergoing the unveiled horror of humanity’s false sacred in solidarity with its victims. The ‘admirable exchange’ of which Paul and the early Church Fathers wrote, where God in Christ undertakes this immersion in the full extent of human alienation so that we can come to enjoy a full immersion in God, is the three-dimensional truth behind our sometimes two-dimensional (and hence potentially off-putting) talk of Jesus dying for our sins.

So instead of deflecting an angry God, Jesus’ cross reveals the fire of God’s love to burn away sin and evil. This feels like divine wrath from the perspective of structures and attitudes that manifest evil in our world. But this wrath is actually the force of love.

The resurrection is God’s great vindication of Jesus’ mission. It begins an arc of glorification, as the once-dead Jesus comes to dwell among Christians as a life-giving Spirit from God. The preaching of God’s word, the celebration of Christ’s sacraments, and our engrafting through liturgy, prayer and discipleship into Jesus’ ongoing life and mission, are all dimensions of the resurrection for Christians to explore and inhabit.

The Revd Canon Professor Scott Cowdell, based at Charles Sturt University in Canberra, is the author of eight books, most recently René Girard and the Nonviolent God (University of Notre Dame Press)

Cornelia Hawkins was born in south London and recalls her early childhood spent sleeping in an indoor air-raid shelter. She would sometimes run home from school after a heavy bombing day to see if she still had a home to go to. Fortunately she did, albeit knocked about quite a bit. Such was life growing up in WWII.

Cornelia emigrated to Perth with her husband and two children in 1973, and none of them has ever had a moment's regret.

In 1986 Cornelia realised her life-long dream to begin Art College, completing my course in Art and Design, majoring in drawing. She has had some success exhibiting across Perth and beyond over the years, winning a few awards, and many pieces finding new homes abroad.

When one thinks about the story of Jesus’s demise, images of destruction of the body are conjured but Matthew 27:57-61 is more tender, almost peaceful in its depiction of Joseph’s care and of Mary Magdalene and the other Mary’s grief. I was compelled to look beyond the scene of the sepulchre and explore emotion and symbolism as part of the Lent Squared Art Challenge.

The word reflection suggests to me meditating on what has gone before the passage. How did what was witnessed impact those witnessing it? While outside the tomb, Mary Magdalene and the other Mary must have their minds full of the vision of Christ on the cross with his cruel crown of thorns. Was the crown of thorns usually part of the punishment of crucifixion? One can’t imagine what the people close to him suffered watching such a barbaric death so the figures presented are still, but very much present in their grief.

Given I have focused on the reality of emotion and grief with the women, I wanted to lend some sort of reality to what the scene would have been like. I was surprised at all the different plants and wildlife which are abundant in the Middle East and I settled on including a typical palm tree and a kingfisher bird, which has such beautiful plumage.

Regarding the imagery beyond the environment, I was very focussed on the crown of thorns from the beginning of this challenge and I wanted it to be an integral part of the work. The first lines I drew were the broken circle lines and faced with such a confined square to work within, drawing some circular lines opens up the space. It felt inevitable that the broken circle would end up as the broken crown of thorns. 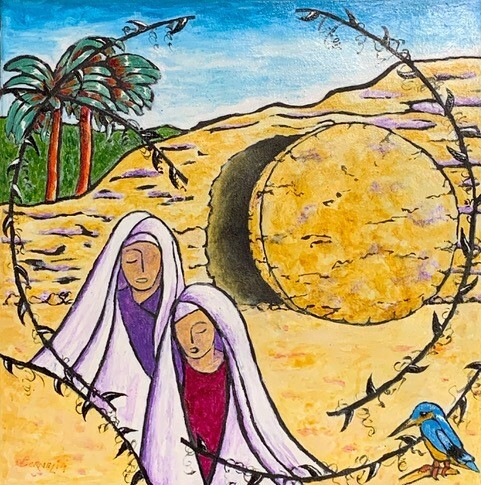