The season of Advent takes its name from the Latin word ‘adventus’ (meaning ‘coming’) in reference to Christ’s coming among us as a baby in Bethlehem. While the historical origins of the season are sketchy, we know that from at least the fifth century, Advent was observed as a six-week spiritual preparation for the solemnity of Christmas, and it mirrored the penitential character and disciplines of Lent. Hence, to this day, violet vestments are used, flowers are absent in church, the Gloria is omitted; and fasting is still observed within the Orthodox churches throughout Advent.

Like ‘Laetare/Mothering Sunday’ in the middle of Lent, a break from the austerities of Advent traditionally took place halfway through the six-week season on the third Sunday (called ‘Gaudete Sunday’) when restrictions were eased and rose pink vestments were worn to symbolize the mingling of Advent’s penitential violet with Christmas’ festive white – which is also why the third candle on the Advent wreath is rose pink.

In 1095, Pope Gregory VII reduced the number of Sundays in Advent to four, and the focus on preparing for the anniversary of the Lord’s coming at Christmas shifted to preparing for the Lord’s second coming on the Last Day. The liturgical antiphons, prayers and readings for each of the four Sundays were intended to arouse in the Christian faithful an expectant longing for Christ’s return to the same degree that Israel longed for its promised Messiah.

Advent eventually took on its own unique significance, and for centuries – unlike today – there were no signs or mention of Christmas prior to 24 December. In ‘A Reflection on Advent’, Rowan Williams explains the value of resisting the rush towards Christmas and the importance of fully entering into the Advent season in this way:

‘During Advent, Christians go back to that time of waiting as the Bible shows it to us. They read again the prophecies in the Hebrew Scriptures and the Old Testament. They read about how people were longing for an end to slavery, longing to be back home in some sense, longing to be at home with God again, longing for reconciliation. And all of that is expressed in the most powerful metaphors, especially in the prophecies of Isaiah; metaphors about the desert blossoming, metaphors about the rain falling, metaphors about day dawning after there’s been a long, long night.

So during this four weeks before Christmas, that’s what Christians are reflecting on. When Jesus comes into the life of the world with something unplanned, overwhelming, something that makes a colossal difference, we long for it and yet we don’t quite know what it’s going to involve. But this is a bit odd isn’t it, you might say. Surely Jesus has come into the world and by now we ought to know what sort of difference he’s made. But the truth is that we don’t yet know the difference Jesus might make. We know some of the difference he’s made to our lives as individuals, to the life of the Christian community, the Church, to the whole world. And yet there’s more. We’re still waiting to see what might happen if Jesus was allowed into our lives that bit more fully; that bit more radically.’

More from The Revd Jacob Legarda

On All Souls Day, and on other occasions, the Church invites us to remember in prayer our departed loved ones as an expression of our love. 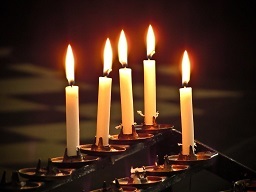