Church of the Ascension Celebrates 120 years

Church of the Ascension Celebrates 120 years

Past and present members of the Church of the Ascension in Spring Park Road Midland celebrated the church’s 120th birthday at an afternoon tea on 31 August.

The church in the heart of Midland has played a significant role in the lives of generations of people in the area.

The Ascension Church Hall, where the celebrations took place, was built during The Revd Reg Arrantash’s time and his name is inscribed on the hall’s foundation stone on the front wall of the building.

At the party tribute was paid to parish administrator Christine Brackley, who has faithfully served the church for more than 35 years.

Fran and Pat Irwin led a singalong of the church’s favourite hymns.

One of the oldest buildings in Midland, the church was built under the guidance of Archdeacon Lefroy. It is styled after St Clement's basilica in Rome, as viewed by Lefroy enroute from his sea voyage from England.

Since the earliest days of the town the community has gathered there for weddings, baptisms and funerals and to celebrate, worship and pray.

A team provides emergency food relief on Friday mornings, and the church band performed at the 2018 Midland Community Carols on Midland Oval.

The Revd Sidney Middlemost is serving as locum while the parish continues its three-year quest for a new rector.

Parish of Midland: History and Outreach 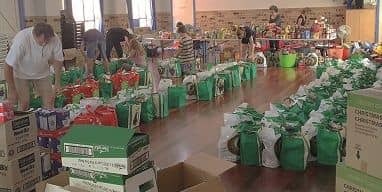