(with acknowledgement to Richard Collier, The Plague of the Spanish Lady: The Influenza Epidemic of 1918-1919. London: Macmillan, 1974)
by The Revd Prof Rowan Strong DD FRHistS | Professor of Church History, Academic Chair Theology and Religion | Murdoch University

The Bubonic Plague of the fourteenth century killed one-third of all Christian Europe in just three years. Most people simply fled from one another, including most clergy, though there were exceptions. In France one community of nuns kept ministering to the sick in their city hospital. And when nuns died others replaced them, until almost all the nuns died looking after others.

In the present pandemic such selfless behaviour is forbidden by governments, but in the fourteenth century the state simply did not have the modern level of social control. Consequently, most of our Christian past is of little help to us in understanding Christian ministry during a pandemic because, unlike those centuries, the Church now is subject to the control of the state, and during a public health crisis is severely restricted in its ministry to the sick and dying. This level of social control by the state began to be exercised during the Spanish Flu pandemic.

In 1917 a virulent fever began to be reported in various parts of the world. Similar episodes of influenza had been reported throughout history. However, compared with other diseases such as smallpox, bubonic plague, cholera, or typhus, influenza was not as deadly a killer.

That all changed from 1918 when soldiers fighting in World War One contracted it from the horrible conditions of trench warfare - men in mud-filled trenches alongside the rotting corpses of friend and foe. This influenza spread round the world with terrifying swiftness. By the time one Cape Town tram had gone three-quarters of its three-mile journey, it had stopped five times to deposit the bodies of passengers until eventually its driver also died. An infected ship allowed to berth in Auckland led to 6680 deaths in New Zealand. Eventually 21 million people died worldwide, with perhaps fifty times that number affected. In Australia there were 13,220 deaths; but in India a ghastly 12.5 million people died.

Clearly, in some cases faith gave individuals courage to face the possibility of death. One woman arrived at a Chicago volunteering station to offer her untrained help to the sick. She was dressed entirely in gold clothing. She told the astonished staff that this was her resurrection outfit. If helping the sick meant her death, she was dressed and ready to go into the glorious new life!

But religious responses to the epidemic could also be part of the problem. Samoan ministers taking up a collection spread the flu from one island to another. So in many cities churches closed, or limited congregations to small numbers. The communion cup was commonly dispensed with. Funerals were held at night so as not to alarm people.

Clashes occurred between modern quarantine methods and age-old religious responses to sickness and death. One such argument was outside the gates of Sydney’s North Head Quarantine Station when the Roman Catholic Archbishop of Sydney demanded entrance to minister to the dying. The government had refused entry. So Kelly orchestrated this confrontation at the station gates with the press in attendance. Within twenty-four hours Kelly’s stance had been supported by the press and the government announced he would be admitted.

By the end of 1918 people in various countries were expressing the need to come together for worship. In Montreal, Canada, the Catholic archbishop and his priests took the Blessed Sacrament to every Catholic home in the city.

The same determination to provide pastoral ministry can be seen when the Spanish Flu came to Perth when returning Australian soldiers arrived off Fremantle in a troopship in November 1918. The Anglican military chaplain who had come with the troops immediately went into quarantine with the worst cases at Woodman Point, while most of the troops remained in quarantine in the ship. A Roman Catholic priest, appointed by his archbishop as chaplain to the quarantine station, voluntarily went into quarantine there. Both priests contracted the disease, but did not succumb to it. It is unlikely such selfless Christian ministry would be permitted by state authorities today.

Published in the May Messenger 2020 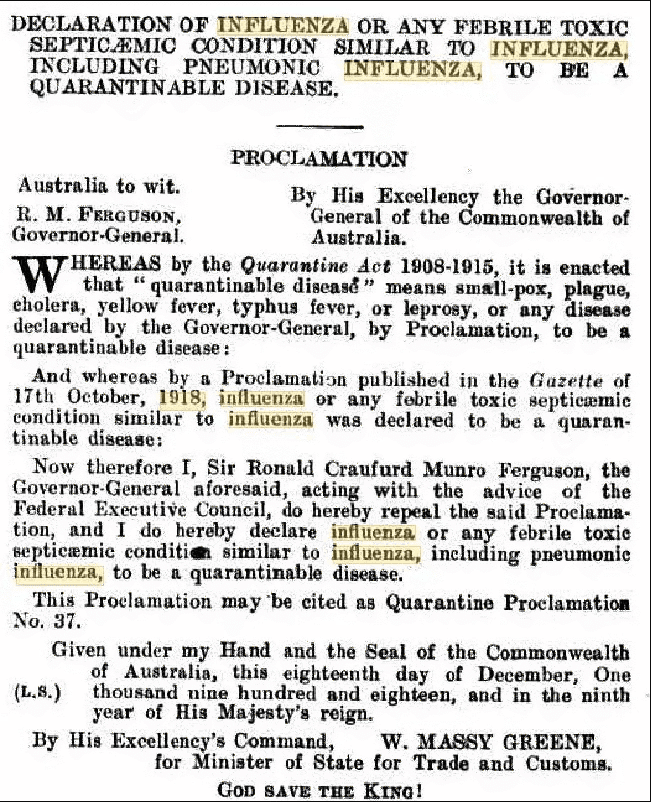