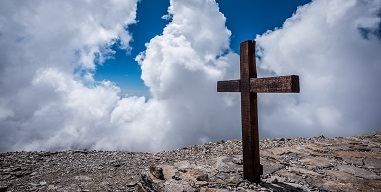 A recent church notice went like this: Chaplaincy movie fundraiser: Easter in Art…stunning film displaying some of the greatest artworks ever produced representing the words of the gospels.

I remember from art there are a great many art works over the centuries representing the life story of Jesus. Annunciation; Birth and Adoration; Baptism; teaching, miracles, healing, Last Supper; Crucifixion; Resurrection; Ascension.

Most were commissioned by the church or by wealthy patrons. The artists were not necessarily believers, but often their subject matter, through the gifting of the Holy Spirit, speaks to us, regardless.

At the turn of the 20th century with the arrival of Abstraction religious themes became less obvious. Though there were some notable exceptions. The Spanish artist, Salvador Dali, painted his 1951 ‘Christ of St John of the Cross’, which portrays Christ on the cross, his hands attached by our sins rather than by nails.

Holy Saturday (known in the Book of Common Prayer as Easter Even) has also been portrayed. Mark Cazalet’s 2010 Easter Saturday puts on canvas what has often been seen as a quiet day bridging Good Friday and the Day of Resurrection. A day in which nothing much happens? Instead of trying to paint a scene from 1 Peter 3:18-19 Cazalet uses coloured chalk on paper to show a clearing in the woods, near his home, in Sussex, UK. The light is radiant with expectation. We are in the presence of something far greater than we can see.

Other contemporary artists have worked at portraying the Christian story on canvas, in video, and on film: Craigie Aitchison (studies in the Crucifixion), Mark Wallinger (Angel, 2009) and Sam Taylor-Wood (Pieta, 2001) among others.

The central belief of Christianity is, however, not that Jesus died, but that he died and rose again. Caravaggio’s 1601 painting The Supper at Emmaus portrays the scene from Luke chapter 24. Two grieving disciples set off on the road to Emmaus. They have no sense of the resurrection at this point. As they walk they are joined by an apparent stranger who explains how the Messiah can only come to glory through suffering.

Captivated, they beg the stranger to stay for the evening meal. As they sit down, Jesus takes the bread, blesses it and breaks it, and in that moment they see him, for who he really is, the longed for Messiah, the Saviour of the World. As Jesus breaks the bread, their wonder is portrayed with outstretched arms, and a chair being pushed back. Caravaggio does not paint Jesus conventionally with a beard. Instead this is a Jesus who as one writer puts it, ‘is eternally young, though still utterly the same’. In this breaking of the bread and the opening of the eyes of our understanding we find ourselves transformed in the Eucharist, and in the wonder of God’s revelation of who Jesus is and how belief in his resurrection invites us to be born again.

In the Order of Burial for the Dead, the Book of Common Prayer (1662) reads: ‘In the midst of life we are in death: of whom may we seek for succour, but of thee, O Lord, who for our sins art justly displeased?’

In Easter that death is transformed by the work of Christ on the Cross and our fears, our foibles and our fantasies are transfixed, forgiven and transformed. 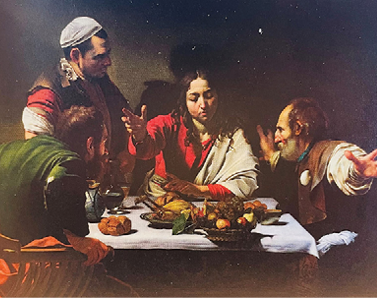