Lambeth Conferences
I Have Known

Lambeth Conferences I Have Known

by The Most Revd Dr Peter Carnley AC

My first memory of the exercise of leadership by the international college of Bishops of the Anglican Communion at Lambeth goes back to 1958, when I was a YA (ie a ‘Young Anglican’ - a teenage member of the Young Anglican Fellowship in the parish life of those days). I recall a photograph in the press of Bishop Ernest Burgmann of Canberra and Goulburn in Trafalgar Square, scattering a bag of corn in the middle of a flock of fluttering pigeons (obviously between sessions of the Conference).

This accompanied a feature story containing the sensational news that the international Anglican Bishops had passed a resolution approving the morality of birth control! This was some years before the revolutionisation of the control of human fertility by the invention of ‘the pill’. In 1958 the Bishops were acclaimed in the secular media as enlightened, progressive, wise, and, above all, pro-human. It is hard to believe that before this Lambeth Conference it had been widely imagined that God’s will was exercised randomly – through chance rather than through considered family planning!

At first I did not appreciate just how important the contribution of this collegial gathering of Anglican Bishops actually was in terms of the world’s social and religious well-being. 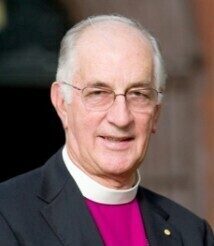 Originally called as an ad hoc gathering in 1867 to address emerging issues of biblical criticism, it now takes its place, ideally every ten years, as one of the four ‘instruments of communion’ that minister towards the important goal of international Anglican unity; the three other instruments being

This structure thus reflects the trinitarian insight that all Christian ministry is exercised in ways that are personal, collegial, and communal. Certainly, in the context of world history its decisions have been momentous.

The Conference of 1968 will go down in history for its decision to commend the then novel idea of the ordination of women to the study of the member Churches of the Communion. By the time the next Conference was convened the Australian Doctrine Commission had come to the conclusion that the arguments that had been raised against the admission of women to ministerial priesthood were invalid. In the United States the first ordinations had already occurred. Now, some fifty years later, the equality of men and women in ministry seems entirely normal, and gender discrimination in ministry entirely unthinkable

The 1978 Lambeth Conference was something of a disaster. In calling the Conference as part of the exercise of his personal ministry, the evangelical and well-meaning Archbishop of Canterbury, Donald Coggan, seemed to have little grasp of the collegial authority of an assembly of world Bishops, and conceived the Conference primarily as a time of ‘refreshment and renewal.’ There was as a result virtually no preparatory planning or research into issues to help the Bishops exercise their ministry of leadership in addressing the world’s many problems.

After about a week of bible study, friendly chat and sipping tea, along with the customary Buckingham Palace garden party, the assembled bishops began to look aghast at each other as they came to realise that they had been assembled from around the world at great expense, and that the rest of the world was actually looking to them to say at least something!

In the week that followed they frantically scrambled to stitch together some fairly lame and innocuous resolutions. It was not a good experience. Fortunately, this was very intentionally rectified at the Lambeth Conference of 1988. 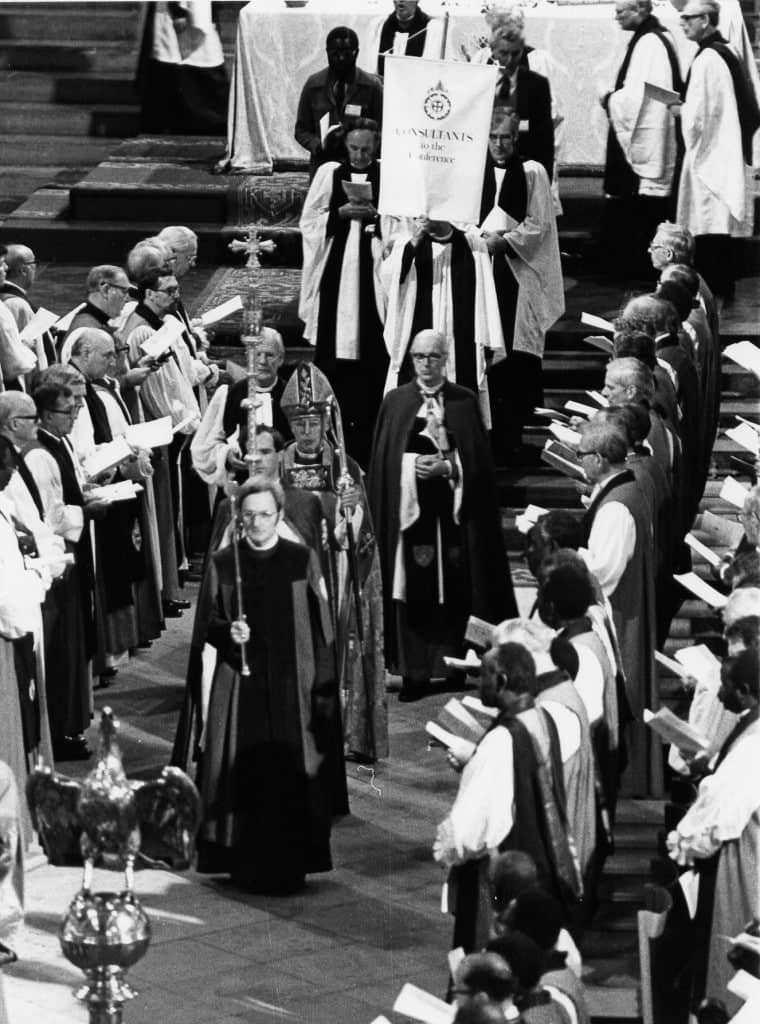 The 1988 Conference was the first which I actually attended. Clearly, a lot had been learned from the disastrous experience of 1978.

Prior to the 1988 gathering preparatory working groups were tasked with doing some basic spade work for the consideration of the full plenary sessions of the Conference. I found myself in a working group with a brief to survey the ecumenical advances that had been made in the course of twentieth century, and to do some creative thinking about possible ways ahead.

At the actual gathering at Canterbury, those bishops who had indicated a preference to join the Ecumenical Section of the Conference were thus furnished with a report (The Emmaus Report) which surveyed in detail the situation that had been reached in specific relations with other Christian Churches, and proposed some strategies which could guide local ecumenical conversations in the decade ahead.

At this Conference I was given the task of drafting the resolution designed to guide member Churches of the Communion in their relations with the Churches of the World Lutheran Federation (Resolution 4/1988). This included a proposal for ‘interim eucharistic sharing’ to foster unity by worshipping together as a step on the way to ‘Full Visible Communion’. This Resolution was adopted by the plenary session of the Conference of about eight hundred Bishops, with only a handful standing to register a negative vote.

This ecumenical achievement of Lambeth 1988 alone amply demonstrates the importance of this ‘instrument of communion’ for achieving enormously important results. Within a very short while (in 1992), the Porvoo Agreement had been signed which achieved full visible communion between the four Anglican Churches of Great Britain and what has grown to fifteen Lutheran Churches of Scandinavia and the Baltic.

Not long after Porvoo, a Concordat was entered into between the Evangelical Lutheran Church (in 1999) and the Episcopal Church (in 2000) in the United States.

These agreements provided for the mutual recognition and full interchangeability of ministry.

This means that in these Churches a person ordained as a Lutheran may now be appointed to a ministry position in an Anglican Church, and likewise, an Anglican may accept a Lutheran appointment. In Australia current conversations seem positively headed in that same direction. 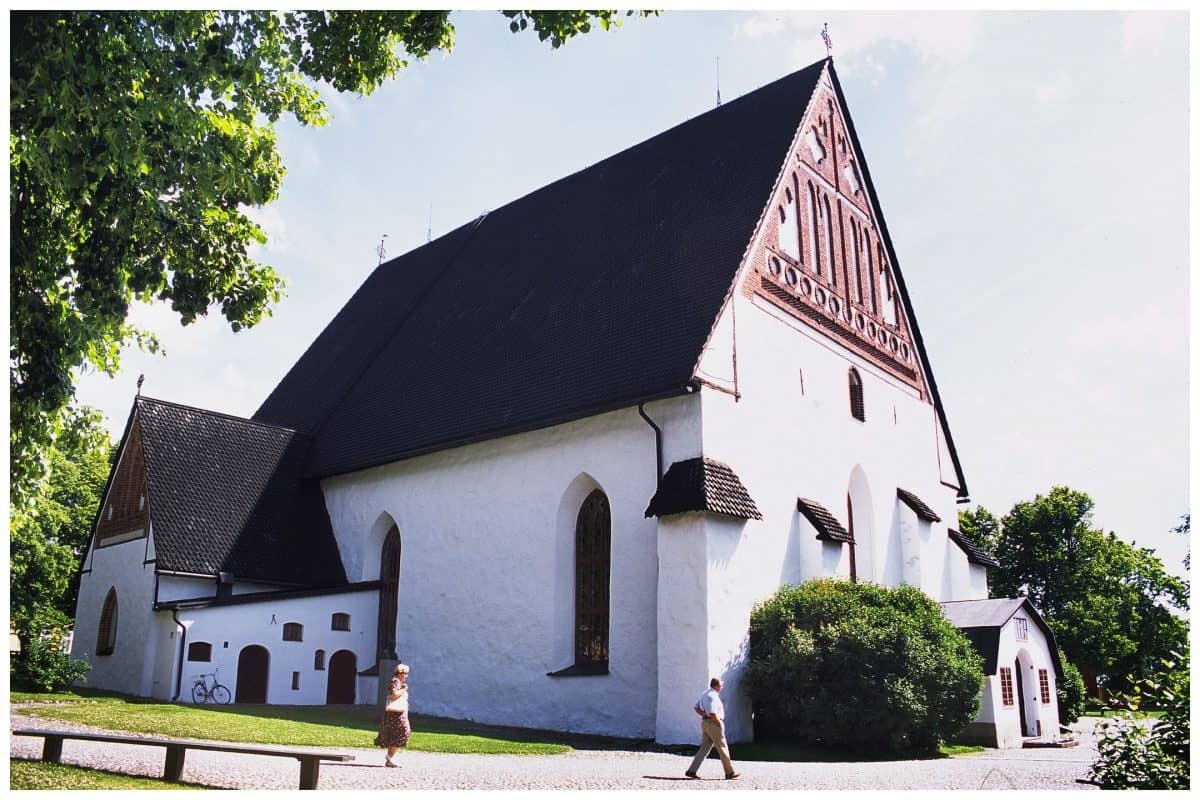 Though Lambeth Conferences are consultative rather than legislative, and so make resolutions for the guidance of member Churches rather than binding Canons, it is clear enough that this system can achieve enormously significant results without compromising the autonomous and self-governing nature of each national or regional Church.

A proposal to strengthen this mechanism by giving the Lambeth Conference the authority to make ‘Provisional Canons’ which would then go to the member Churches for local debate and adoption or rejection as the case may be, was at one time suggested as a way of handling more contentious and difficult-to-resolve issues; this kind of mechanism operates within national Churches, but it is not an idea ‘whose time has come’ for the Anglican Communion as a whole.

However, even if it does not have legislative power, simply by endorsing and commending specific courses of action for adoption in the Communion at large, the international assembly of Bishops possesses sufficient collegial authority to exercise a very significant ministry of leadership. This is why the Lambeth Conference enjoys such prestige as one of the four ‘instruments of communion’.

Despite the assembled Bishops’ commitment to serious business at the 1988 Lambeth Conference, the notoriously cantankerous reporting of the British media tended to trivialize it - by suggesting that the chief activity of conference Bishops was to do yoga-like exercises on the lawns in jump suits, and by highlighting the apparent addiction of one notable US Bishop to appear on the same lawns in front of TV cameras.

Many of us felt that what the secular press was reporting was not the Conference we were at. So, I undertook to write a Letter-to-the-Editor of the Lambeth Daily, (the conference daily news-sheet), which, much to the delight of Robert Runcie, the Archbishop of Canterbury, put the cat amongst the pigeons by pointing this out, and inviting the secular journalists to a press conference where we could interview them rather than vice versa.

A few adventurous journalists showed up to answer questions about whether they were honestly reporting what was happening, or just manufacturing stories by jumping to the requests of their respective Editors-in-Chief, or worse, some behind-the-scenes media magnate. Some months after the Conference when I was back in England on some follow-up work, I was taken to lunch by one London Times journalist who was still ruffled by the thought that his journalistic integrity might be thought to be compromised by the dictates of a Rupert Murdoch.

Despite the hard work associated with the 1988 Lambeth Conference there was also some time for fun. Prior to it I had a commitment to preach in the Chapel of All Saints in Windsor Great Park. The Queen and Prince Edward were present, seated in a vestry-like enclosure to one side of the chancel, in line of sight through an arch to the pulpit, but away from the view of the congregation of workers from the Royal Estates in the nave. 1988 was the 400th anniversary of the defeat of the Spanish Armada (which had sailed with a papal blessing), so it was an opportunity to speak of the overcoming of religious tensions of the Reformation era when ‘God blew and the enemy was scattered’ (according to a commemorative medal struck by Elizabeth 1), and to express the hope that through the modern ecumenical movement God might ‘draw in his breath’ to bring us all back together.

After this event the Queen invited us to gin and tonic in Windsor Lodge, which had been made available by the Queen Mother (who, sadly for us, was away on duty as Warden of the Cinque Ports at the time).

Subsequently, I was chuffed when the Queen, at the end of her Christmas Message in this commemorative year of the Armada, made a veiled reference to the role of the divine respiratory activity in scattering the Spanish. 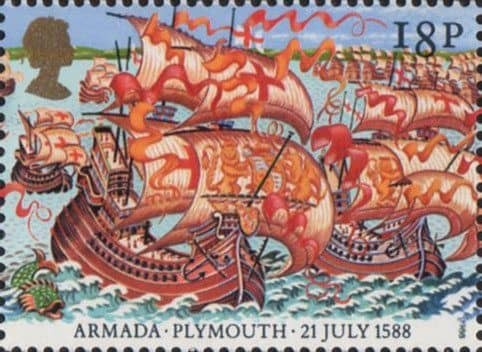 The 1998 Lambeth Conference was impressive in dealing creatively with a very large number of resolutions. As a quick glimpse of the archive (at www.anglicancommunion.org) will reveal, both the volume and the range of issues addressed was quite mind-blowing - from the environment and global warming, and the human responsibility of care for refugees and respect for indigenous minority communities, through to ecumenism and euthanasia.

This was even despite the fact that the Conference had to face up to the seriously disruptive challenge of the conflict of ideas over the question of how best to minister to homosexual people. This persisting and difficult-to-resolve issue, particularly across radically diverse cultures at an international level, has helped the Anglican Communion to see that, in a world in which some people think that they can have their way by shouting louder, and the disenchanted simply opt out of the discussion of issues with which they disagree altogether, those who are committed to being of ‘one heart and one mind’ have to be true to their belief that they really only contribute to the corporate discernment of the will of God by being intentionally open to the leading of the Holy Spirit, listening carefully to different points of view, and following the logical pressure of a cogent argument.

As Anglicans, we may leave the governing work of legislation to the national and diocesan synodical processes of our local Churches, but we dare not underestimate the crucial significance of the ten-year structured conversation amongst our international episcopal leaders at Lambeth. And this is not to mention the associated programme that is shared with their spouses, of bible study, prayerful discernment, mutual support and friendship. In ministering to human well-being and unity, the Lambeth Conference takes its place as one of the most important of the world’s peace movements. 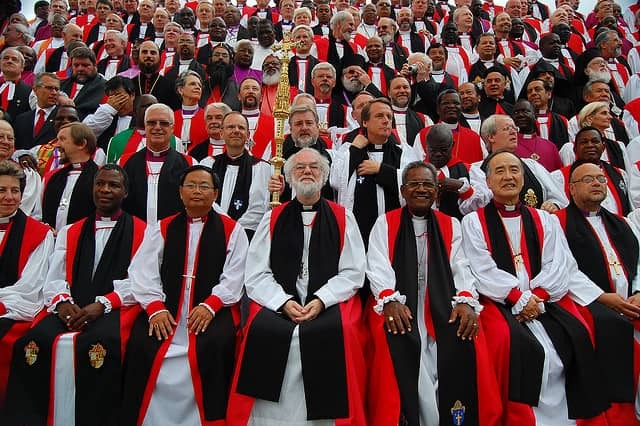