75 Years Ago -
A Memorial Remembered

75 Years Ago - A Memorial Remembered

Despite the War, the majority of people in the country town of Louth and the surrounding villages are asleep.

Except at Binbrook, home of the RAAF’s crack 460 Bomber Squadron where guards, ground crew and medics are getting ready for the return of the squadron’s Lancaster BIIIs. All ears are straining for the distant throb of Rolls Royce Merlins.

For the bomber crews this is the end of yet another mission over Germany. Grim, determined faces, fighting off a night’s fatigue to prepare for landing at Binbrook. Many of the aircraft have been damaged by enemy fire or suffering other problems. The runway lights are illuminated as one by one the Lancasters touch down.

But for one crew this is not the end of a night’s flying but the dawn of a new day. Pilot Officer Dick Miller from Kalgoorlie and his crew have had a restful night and are shortly taking off on their final training flight, a navigation exercise (navex) from Binbrook, south to Luton in Bedfordshire, then up to Scunthorpe and back to Binbrook. When this is complete, the crew will be operational and ready to join their mates in operations over Germany. After breakfast the crew settle down to plan the flight and maybe write letters home. Dick Miller’s young wife lives in Perth, while the other crew come mainly from Victoria. Two, Rhod Pope and Anthony Robinson, are just 19 years old.

At 1124 hours, checks completed, Dick winds up Lancaster PB 812’s engines to full revs and the bomber powers down Binbrook’s main runway and up into the cold winter sky. The Lancaster reaches Luton successfully, but unknown to the crew, all is not well. Training Lancasters were usually time-expired operational bombers not considered reliable enough for operations. As PB812 passes over the little village of Caythorpe, south-west of Binbrook, it suddenly catches fire and the crew lose control of the aircraft. It goes into a dive and crashes close to the old railway station. There are no survivors. 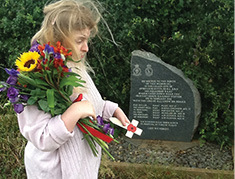 Imogen James has severe, multiple and profound learning and physical disabilities. She cannot understand about history and conflict, but she enjoys flying. She also attends her local church in Northamptonshire where she takes the collection. Every Remembrance Sunday she stands in silence in the chill November wind while the Last Post and Reveillé are sounded at the War Memorial.

Then she goes and places a cross of remembrance on the only Commonwealth War Grave in the churchyard: Flight Sergeant Charles Auld, Royal Canadian Air Force, who was also killed on a training flight when his Wellington crashed not far away from the church in July 1942.

Imogen has particular reason to be grateful to all the servicemen and women from Australia, Canada and many other Commonwealth countries who gave their lives in the Second World War. From the autumn of 1939 onwards, the Nazis’ policy was to murder all learning disabled people by lethal injection.

During the recent Coronavirus crisis, Imogen has been unable to go to church. So, every Sunday morning she and her father Jimmy watch the morning service from St George’s Cathedral, streamed into their home from over 9,000 miles away.

She is also unable to attend her Special Educational Needs (SEN) tertiary college, so her father, Jimmy, has taken her out every week to visit places of interest.

On 30 June they drove up to Caythorpe where Imogen placed a cross of remembrance and flowers on the memorial to the crew of Lancaster PB812. The memorial was dedicated on 17 September 2016 in the presence of relatives of the crew, serving RAAF and RAF personnel and representatives of veterans’ associations.

Thanks to the crews of 460 Squadron RAAF and thousands like them, Imogen has a happy future in today’s Commonwealth. That future has only been made possible by the sacrifices of sailors, soldiers and airmen from every part of the Commonwealth.