Wil Anderson, host of ABC’s popular Gruen TV show and one of Australia’s most beloved comedians, recently had me back on his podcast for the third time to talk about my faith and this moment in history. I read him a kids’ story. I’d like to now share it with you. The following story was written for my two month old baby after Kat’s 90 year old Oma met our boy, her great grandson, Noah-Otis McKenna. While she held him for the first time, she commented that the footage of Trump setting militarised police on protestors reminded her of when the Nazis invaded Holland as a child.

In this #BlackLivesMatter moment when God is exulting valleys and making low mountains, when statues of murder and injustice in our streets and hearts are being torn down, we must remember our baptism. We must remember what it is to be called out of all empires, ancient and modern, to be God’s people. We must remember we were not called to be chaplains to the way things are, but heralds of God’s will being done on earth. Our mission is to desire above all things God’s reign of healing-justice, restoring-peace and liberating joy in the Holy Spirit. It is time for those who have been first to put themselves last and those made last to take their rightful place at first.

We must remember and tell the stories - not of those who steal, kill and destroy - but the saints who dare to love in public in ways that make those well-adjusted to injustice hear the call to repentance. Let us stop saying, ‘these are dark times’. That’s a misdiagnosis. It has been dark, for so many, for so long. These are times when the light is breaking in. It’s time for God’s people to let their light shine. So here for my baby, and now for you, is a story of shining in the dark.

Once upon a time, your great-Oma was a little girl. A little Oma.

Little Oma loved many things.
Sunshine on her cheeks and birds in the air.
Running in the fields with her big brothers. Laughing with her friends.

But it wasn’t all fun and games. Little Oma had duties.

Everyday, Little Oma had to do a most important chore.
Little Oma, only 10 years old, had to lay out the mat and place all the shoes upon it.

This was a very special job.
Because under the shoes...
Under the mat...
Under the floorboards...
Little Oma had special friends.
These friends were not kabouter, nor elves, nor fairies.
Nor were they scary like monsters or dragons.

They were wonderful children, just like you.
The only difference was they were Jewish.
Just like your old grandpop on my side of the family.

But this story does have a monster. More scary than a dragon.
This monster adults call by a strange name, FASCISM.

And friends of Fascism wanted to kill Little Oma’s friends.
Because they had a different religion.
And they spoke a different way. And often looked a bit different.

So Little Oma would sweep the floors,
so the fascists couldn’t see her friend’s footsteps.

Little Oma - just ten years old-
would risk being shot by picking turnips at night
so the fascists wouldn’t know her parents were feeding her friends.

Little Oma would help put away the dishes so if the fascists raided the house
there would be no sign of her friends.

And little Oma would do her most important duty,
she would love her neighbours by hiding them
Under the shoes... Under the mat...Under the floorboards...
So the fascists wouldn’t win.

If you were to ask your Oma about this
she would laugh at talk of being heroic, or selfless or brave.
She would tell you, 'I was just doing my duty'.

And that’s why your Oma has a soft spot for Antifa.
Because our family proudly is anti-fascist.
So we will also do our duty, and love our neighbours too. 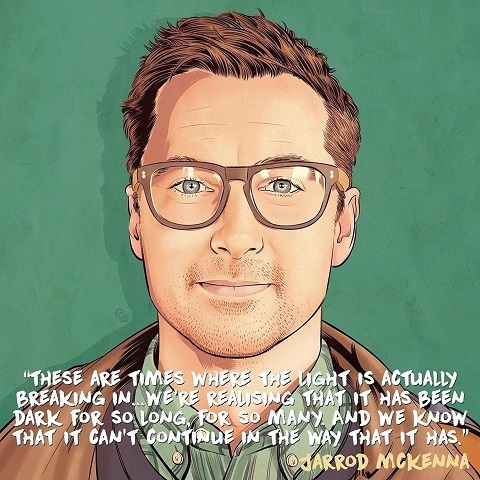