by Mark A Hadley | Reviewer

Genocide. It’s one of those inherently evil words. It belongs to a small set in the English language that are unaffected by their context. There can be no such thing as a ‘good’ genocide. Yet the film Beautifully Broken suggests that there is a way in which good can still come out of such heinous act.

Genocide. It’s one of those inherently evil words. It belongs to a small set in the English language that are unaffected by their context. There can be no such thing as a ‘good’ genocide. Yet the film Beautifully Broken suggests that there is a way in which good can still come out of such heinous act. 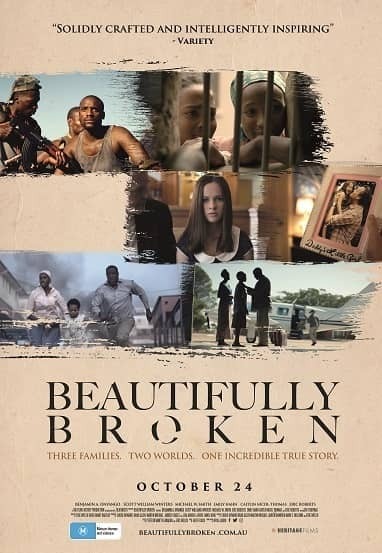 Beautifully Broken frames its story around three fathers living a world apart, but strangely connected by the slaughter of 800,000 Rwandans. In 1994, the death of the Rwandan president in an aircraft accident sparked a powder keg of racial tension between rival tribes. Hutu militia took the opportunity to turn on the country’s Tutsi minority, bathing the country in blood. Though the film is careful in the way it displays the violence of that period, it is not hard to imagine how scarring those days would have been for the families involved.

Beautifully Broken’s first father is William Mwizerwa, a Tutsi supervisor at Rwanda Coffee and the father of Aimee. He is forced to flee with his family when the violence breaks out, heading for his mother’s home in the hope of avoiding the conflict.

When he arrives, though, he is confronted by the film’s second father. Mugenzi is a Hutu field hand who has been compelled by the militia to join the gangs rounding up the Tutsi. If he doesn’t wield his machete on their behalf, they will turn it on his daughter Umuhoza. But Mugenzi decides to spare William’s life and the supervisor is able to eventually flee to America, where he meets father number three.

Randy Hartley is a successful Nashville businessman struggling with his daughter, Andrea. A secret shame has come between them, transforming ‘daddy’s little girl’. How these lives are woven together is both uplifting and miraculous – and I mean that last word quite literally.

In order to get the most from Beautifully Broken, audience members will have to keep reminding themselves these events actually happened. The buried connections between the characters are so surprising that in any other script they would smack of dramatic convenience. Yet the weaving together of these real-world lives is possibly the strongest argument for an unseen hand working behind the scenes. Certainly, that is the perspective of William, Mugenzi and Randy.

All three fathers live with the conviction there is a spiritual dimension to life that should shape their physical lives. Randy’s faith is easiest to see. He inhabits a Christian American culture that sees him regularly chat with his pastor, attend church, and serve on its finance board. But it’s more than a social commitment. In the darkest parts of the film he demands to know why God isn’t doing ‘His job’, taking care of his struggling daughter. William’s convictions can be discovered in the way that he interprets the horror going on around him:

Aimee: I’m never going to see my 15th birthday, will I father?
William: You must not say such things. God just delivered us with a miracle, and He will continue to be with us. Everything will be ok.

Even Mugenzi, the least vocal of the trio, is concerned with the guilt attached to his actions and his need for mercy. In addition, the three are united by the spiritual question that centres on suffering.

Beautifully Broken puts the problem of a good God and a suffering world, front and centre. From the large-scale picture of the Rwandan Genocide, to the small-scale suffering of a molested child, the question constantly arises: Why wouldn’t God choose to stop these things?

Some might see that as reason enough not to believe in a good creator, but it’s a question people of faith wrestle with too. The answer Beautifully Broken offers is that God has His eye on something even more precious than the peace we cry out for. William tells his daughter,

“No clay has ever become a beautiful pot, without going through a little fire.”

In essence, William is appealing to a truth the Bible offers:

“We … glory in our sufferings, because we know that suffering produces perseverance; perseverance, character; and character, hope.”

The hope that allows us to endure is the knowledge that God has a purpose for our pains. Like a master sculptor, He directs the blows we suffer so that they shape us into people we would want to be if we could see past the moment.

Each chip, however painful, allows something more beautiful to emerge. He uses suffering to sand, shape and shine until we take on the image of His son Jesus, the greatest example of humanity ever to walk this valley of tears. And trusting ourselves to His plan will one day bring us into an existence we can only dream of. As C.S. Lewis put it,

“This world is a great sculptor’s shop. We are the statues and there’s a rumour going around the shop that some of us are someday going to come to life.”

No wonder William can assure Randy, God sees much beauty in the broken.