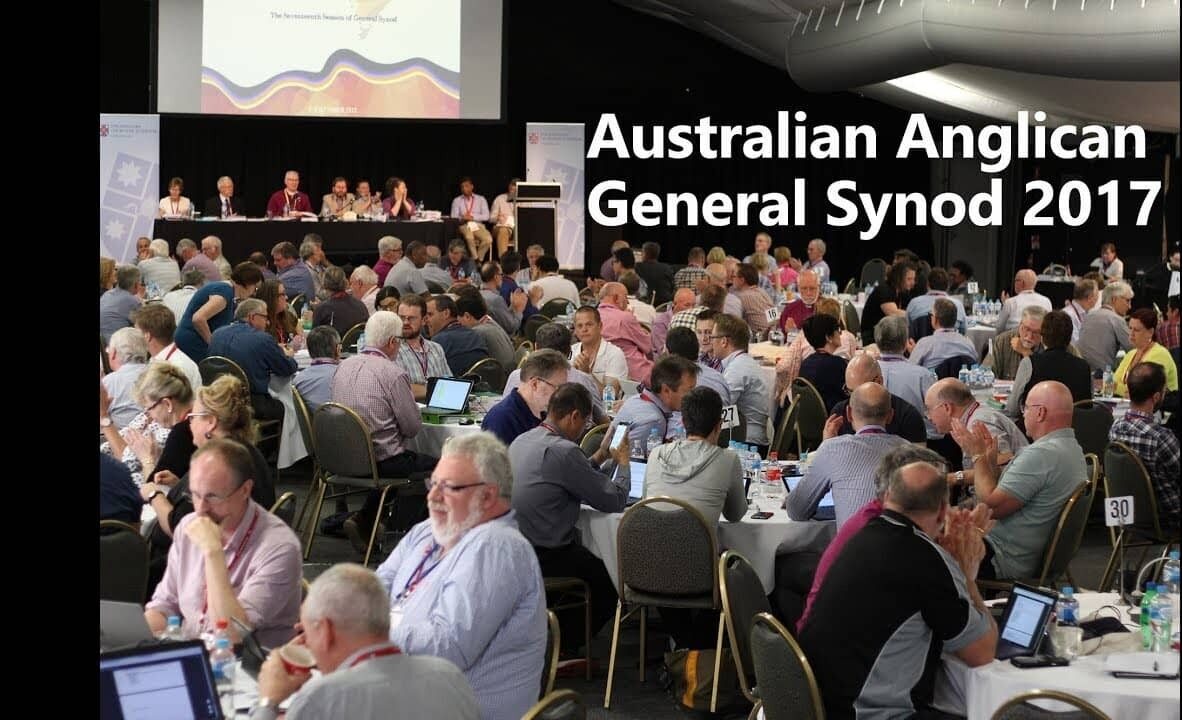 by Ian Carter AM

I’ve been a member of General Synod for almost 20 years and I’m still a bit sane and I don’t go to too many counselling sessions after I come back from these marathon events, which last around six long days from early in the morning and into the evening!

The first General Synod took place in 1872 through a “constitution of church government” which lasted until 1961.General Synod as we now know it was effectively established with the passing of a new Constitution to establish the Church of England in Australia in 1962. It wasn’t until 1981 that we severed all legal ties with the Church of England and we became the Anglican Church of Australia. Right from the days of the colonies there was a wide range of churchmanship begun in many ways by the People who were sent from England as Chaplains and the Archdeacons and ultimately Bishops who came to play a role in establishing the Church of England in Australia. At times we came under the Bishop of London and then the Bishop of Calcutta! Right throughout this period the parishes and then the dioceses always saw themselves as independent Places and not a part of some National Church.

General Synod operates like a parliament in some ways, with similar Standard Orders to the Federal Senate and I remember talking to former Senator Christabel Chamarette who said she found her transition to that role being made a lot easier because she has been a member of the Perth Diocesan Synod. We, however, also have three Houses; Bishops, Clergy and Lay people and we have 23 Dioceses present plus members from the National Aboriginal and Torres Strait Islander Anglican Council (NATSIAC). At the last General Synod held in Maroochydore in 2017 there were 260 members of General Synod. The vast majority come from the five Metropolitical Dioceses who make up 62.6% of all members, with the Diocese of Sydney having 27.3% in its own right! I have always found this inequitable. It means that large Dioceses, like Sydney with 71 members, is voting against 16 Dioceses with only three or five members. The other anomaly for me is that the very large ministries of the Anglican Church in Australia like the hundreds of Anglican schools and the very large Anglicare Australia network have no formal role and no voting rights at all!

So what do we talk about at these Synod Sessions? Well largely we talk about Canons and amendments to the Constitution. Much of this is very technical and much of what is passed only comes into action if passed by each of the Dioceses in their own right. Ask Eric Ross-Adjie if you want to know more!

General Synod needs to exist but stresses and strains between Dioceses and then between Dioceses and the General Synod itself all plays out a lot like our parishes and their relationship with our Diocesan Synod. Our church structures certainly favour Place with smaller structures favoured over centralized arrangements. We still talk too much about sex in all its forms and gender issues still need to be addressed. Sometimes General Synod has descended into behavior I find difficult to accept but I’m very pleased our Diocesan Synod often debates and passes motions for action on social justice and environmental issues because they rarely get a look in at General Synod!

So, no General Synod this year and I bet many of the 260 members will breathe easier, but like me will miss the bits around people and the fellowship and the friendships built up across the country over many years.