Reflection by The Reverend Ted Witham

In 2003, Rae and I celebrated our 25th wedding anniversary by being tourists in Broome for a few days. We learned how pearls are grown off Broome’s coast. The pearl grows in a frame just beneath the ocean’s surface, starting as a tiny irritant inside the oyster’s soft tissue and over its lifetime growing to be a much-desired jewel.

Pearling can be dangerous. In the early days of the industry the lives of indentured Malay and Indigenous divers, slaves in all but name, were held cheaply. Many died then, but even in recent times, young divers have lost their lives.

Jesus’ parable about the pearl is a jewel in itself, only 24 words long in the original Greek. This pearl is extraordinary: it can be found in a field, but the finder cannot simply pick it up and claim it as her own. The finder must want the pearl so fiercely that she is prepared to give everything she has to obtain it. Even then, the pearl cannot simply be bought by itself; the whole field must be bought.

The parable speaks of a pearl as valuable as life itself. For what would we be prepared to sell everything we have to acquire it?

This 1870s engraving shows a woman and a young girl being auctioned as property. In the world of Jesus, and in the United States from the 17th to the 19th Centuries, people owned other human beings – slaves. Trafficking in human lives is still a wicked problem in the 21st Century.

As property, slaves have no freedom to order their lives: their time and their bodies belong to their owners. Some slaves could imagine no other way of living. Other slaves were prepared to give everything they had to free themselves and their families. Some saved up money out of crumbs to buy their freedom. Some risked their lives to run. Of these, a fraction succeeded to find their freedom in the northern states; others were killed or taken back under even more harsh conditions.

The pearl, for slaves, was freedom: freedom from being owned by another, freedom to be oneself.

Jesus says wanting to obtain the pearl is ‘like the Kingdom of heaven’ (Matthew 13:45). The pearl we give everything for is the life-long process of seeking and knowing God.

We have been slaves. Nothing like the actual slaves of 18th Century America, but we have been unable to choose the right actions. We have let our greed for money, for others, for selfish pleasure, rule our bodies. Our thought-patterns are permeated by the sinfulness of the world, so without choosing it, we too are racist, we too are xenophobic. We have all been there. As hearers of Jesus’ parables we are former slaves on the way to freedom from these forms of imprisonment. The Holy Spirit works in each of us to become the person God wants us to be.

We can deceive ourselves that we are happy the way we are, or we can choose to work with the Spirit for our freedom. We can decide to keep our eyes on the prize, the pearl. 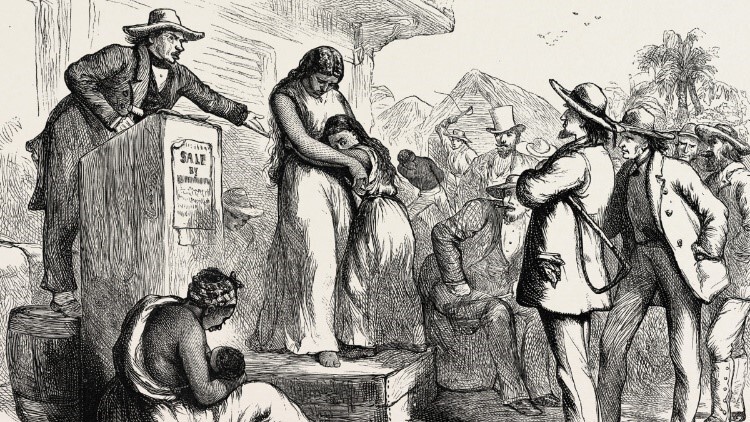