Sunday 25 August was a day of great rejoicing as the parishioners of St Nicolas, Carine-Duncraig celebrated the 30th Anniversary of the dedication of the parish centre by Archbishop Peter Carnley on 2 September 1989.

A combined service was held at 9.30 am with Bishop Jeremy presiding along with the Rector, Lorna Green.

The original vision that lead to the building of the church began 38 years ago on 6 December 1980, which coincided with the Parochial District of Carine being declared. The church was named St Nicolas as this too coincided with St Nicolas’ feast day.

Like the early Christians, the parish began with local Anglican Christians meeting in homes for nearly two years. On 19 August 1982, The Revd Bernard West was commissioned as Rector and services were held in the Rectory garage.

Founding member Mary Bannister, now 98, fondly remembers these early years. Having just moved to Carine from England. Mary recalls with amusement arriving at church for the first time, to be greeted by the new Rector, Roy Poole, welcoming them to the garage and later asking if she and her husband Fred would like to help build the church!

The congregation soon outgrew the garage and moved to the Library of Carine High School. By January 1989 there were sufficient funds to begin building, with contractors and parishioners combining their skills to complete the task within nine months.

Overseeing the project was parishioner and engineer Ed Scott, who still marvels at the ways God provided during this time and the commitment of the small group of parishioners who worked tirelessly to complete this vision.

During the past 30 years the parish has continued to flourish under the ministry and guidance of a number of Rectors, including The Revds Greg Davies, Richard Pengelly, Christine Simes, Helen-Jane Corr, and the recent arrival of Lorna Green.

The parish is currently planning a Sundowner to be held on St Nicolas’ Day, 7 December, where it is hoped former Rectors and parishioners of St Nic’s will join the festivities as we once again celebrate God’s provision and the inspiring vision of these early parishioners in the parish of St Nicolas Carine-Duncraig.

The parish of St Nicolas is an Anglican church in the broadly Catholic tradition. 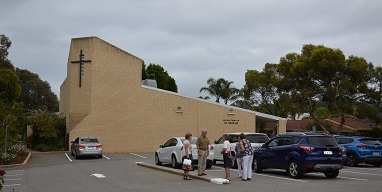