The Western Australian Parliament is currently debating a proposed Bill to legalise Voluntary Assisted Dying (VAD). The proposed changes will have significant social ramifications and impact the Mission of the Church. To discuss the issues surrounding VAD, Archbishop Kay Goldsworthy called a Symposium at Wollaston Conference Centre on 27 August, which was organised by the Social Responsibilities Commission.

There is such a high level of interest and concern surrounding the proposed law, that the Symposium was fully booked, with over a 120 people attending, and more on a waiting list.

Chaired by Archbishop Kay, the Symposium heard from a range of experts. Dr Scott Blackwell, former president of the WA branch of the Australian Medical Association, described the creation and ‘journey’ of the Government’s expert panel on Voluntary Assisted Dying. His main piece of ‘advice’: think about an advanced care directive now.

Former Archbishop Peter Carnley AC has devoted considerable time exploring the moral and ethical issues of Assisted Dying. He wrote an extensive response to the government’s report, ‘Light on Logic’, and sent copies to all members of the expert panel, reporting that all but one failed to respond. In his presentation, he highlighted the lack of public, moral discussion around the issue and explored some unresolved ethical issues and possible consequences of the legislation.

The practical implications of the possible introduction of Assisted Dying were explored by Marian McCarthy, General Manager of Health Care Quality at Amana Living. She talked about the commitment and capability of Amana, and the aged care sector, to respect people’s choices within any possible new landscape of care that includes VAD. She affirmed that Amana will do this within the broader context of being an Anglican agency.

The Reverend Dr Gregory Seach, Warden of Wollaston Theological College, picked up some of Archbishop Peter’s points and presented a Christological Reflection on the ‘Gift of Life’. He explored what our Christian faith has to say to the concept of Assisted Dying. Emphasising the human need for control, in contrast to Christ’s self-emptying in obedience unto death, he reflected on what the prospect of these laws mean for us as Christians, and how we may reflect and talk about this with ourselves.

There were no easy “answers” given in the Symposium, and the Archbishop’s choice of speakers reflected the diversity of responses to both the proposed law and the broader issues of suffering, palliative care and death. Discussion and exploration of the issues continue within our community and parishes.

Copies of the some of the presentations, Archbishop Peter’s ‘Light on Logic’, and other material can be found on the Social Responsibilities Commission’s VAD page

We attend to listen

The Anglican Social Responsibilities Commission initiates and facilitates education which informs and supports social justice advocacy in the community and diocese. 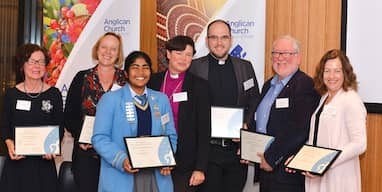