A Donation with
a Few Surprises

A Donation with a Few Surprises

A recent donation to the archives contained a few surprises; unexpected items stored within a book collection belonging to Thomas Blackburn.

Thomas Blackburn was born in 1878 in Leyland, Lancashire. He and his wife Helen sailed for Australia on the Orontes in 1911. Thomas was involved in the Church Missionary Society where he was appointed Honorary Life Governor, British and Foreign Bible Society, Church Army, Provincial Missionary Council and the League of Youth. He served as a lay reader in the Diocese of Perth from 1911-66. His services were relied upon during the War years to preach at multiple parishes and he was known to travel long distances.

The books within the Blackburn collection include some which were acquired in England prior to his arrival in Australia. Several of them are inscribed, having been made as gifts to Thomas. One of the books, Houses of God, was a gift from the Archbishop of Perth and members of the Perth Diocesan Council on his retirement after 50 years as a lay reader.

A collection of books such as this is significant in its aesthetic and research potential. As the collection is well provenanced, they could be used to document the beliefs and interests of Thomas Blackburn. They are also representative of the resources used by someone of Thomas’ position.

Within one of the books, botanical specimens were found. They had been carefully pressed between the pages and are in surprisingly good condition. It is not clear whether these plants were pressed in England or Australia, but their condition suggests they were important keepsakes.

The book collection was first cleaned by brushing with a soft brush. The books were then wrapped separately in Tyvek* and added to the main collection in a box. The specimens required separate treatment and were removed from the book’s pages, the details of which we recorded in the Archives database. Specimens were individually sewn onto archival board and a layer of tissue was applied as a cover. The board provided support for the item which was then boxed and added to the main collection.

* Tyvek is a material widely used in archives. It is a synthetic, water repellent, tear resistant material which can be sewn into enclosures like envelopes or costume bags or used to wrap items. It serves to provide an extra barrier between objects and any environmental damage. Within archives, we use Tyvek as a cover for books, costume and artworks. 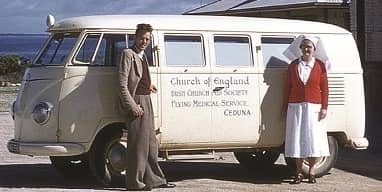