GFS: End of an Era

GFS: End of an Era

How do you express your feelings at the loss of something dear to you? This I refer to the landmark of the Girls’ Friendly Society Lodge at 240 Adelaide Terrace Perth which has recently been sold. This was not just a Hostel but a home to many hundreds of girls and young women over many years and more recently for males and females.

GFS was founded in England in 1875, initially for young women, but the founder Mrs Mary Elizabeth Townsend believed that from the very earliest days that young girls from eight years should be included. This would give them the Christian influence of GFS in their lives from an early age. The Society quickly spread to Australia and other parts of the world as a supportive arm of the Anglican Church.

The first President of GFS in Perth was Mrs Riley, wife of Archbishop C O L Riley, for 25 years from 1903. In her time she helped develop even closer links between the Society and the Anglican Church. GFS in England successfully ran Lodges for young women away from home and the need for a Lodge in Perth was clearly seen. A proposal in 1913 from the Claremont GFS Parish Branch ‘That all branches make a great effort to raise funds for a central Lodge’ This was passed. Through the generosity of Richard Vincent and William Loton they advanced GFS the money to purchase 240 Adelaide Terrace, which was originally the home of Captain John Septimus Roe, the first Surveyor General in Western Australia. After extensive renovations the Lodge was officially opened by the Governor, Sir Harry Barron on 5 June 1915.

My early recollection of the Lodge goes back to 1951 as an eight-year-old GFS member at St Peter’s Mt Hawthorn. GFS Branches back then still took an interest in the Lodge by providing furnishings and other items. I witnessed the opening of the new wing (Ethel Burt Wing) built at the back of the property in the 1960s that provided further accommodation over three floors for 45 girls. With the new and old building accommodation could now house 62 residents.

My visits to the Lodge were frequent when I assisted Mrs Trixie Reynolds, a Life Member of GFS, to provide activities for the girls at weekends. In 1979 I was an Executive Member when the decision was made by the GFS Council to demolish the original Lodge building that faced Adelaide Terrace. The responsibility of the Executive was the new building which was designed by the architect, Mr George Winning. The building was opened and blessed by the Archbishop of Perth, The Most Revd Geoffrey Sambell, on 23 November 1980. Archbishop Sambell’s short talk touched me to the point I accepted the role as Supervisor of the Lodge.

The new building had provision for the GFS Headquarters bringing the two arms of the Society into a closer working relationship. So not only the Lodge will be missed but a GFS Headquarters in a centrally located position in Perth will be.

Today, Mission may be closer to home and in remote or disadvantaged corners of Australia. 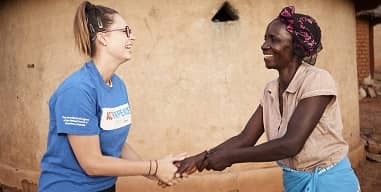